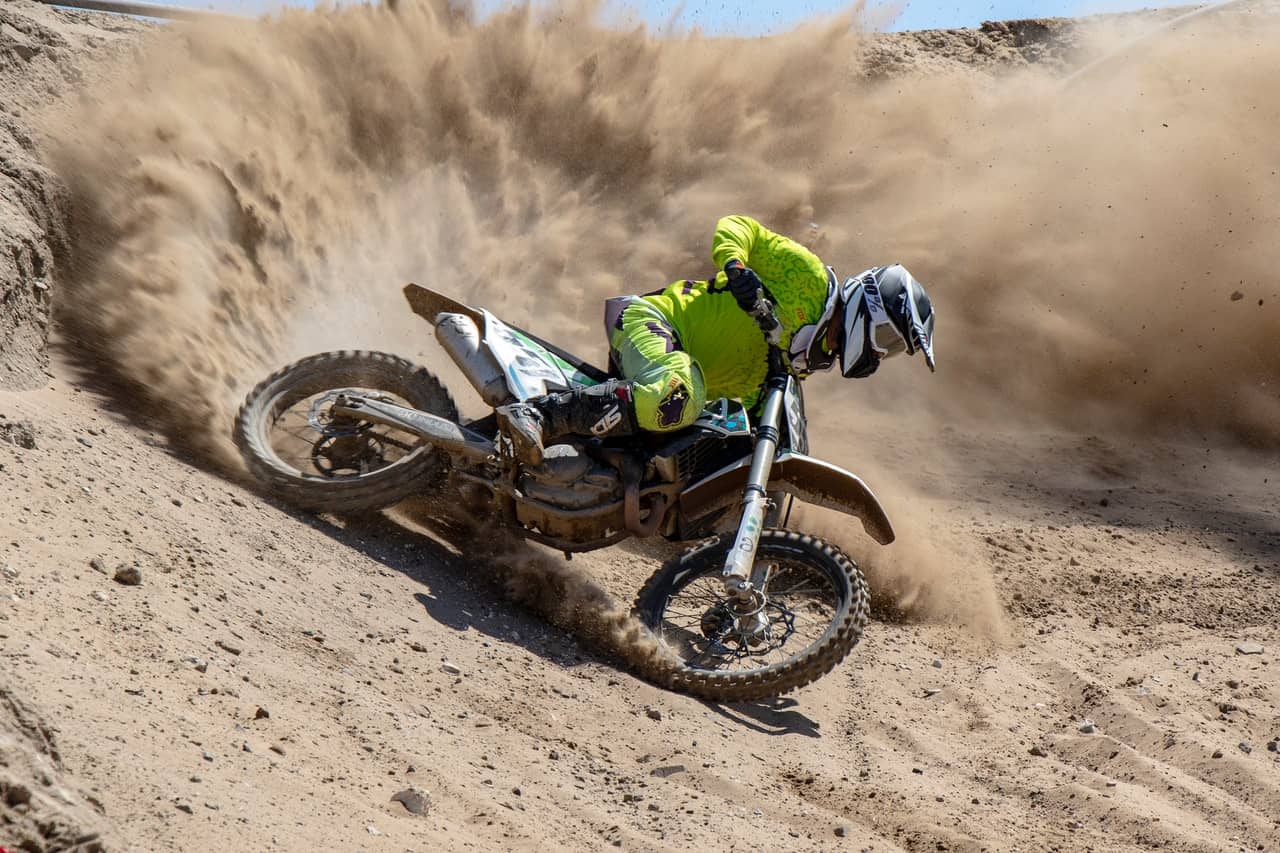 Dirt bikes are the lightweight, rugged, off-road motorbikes having the ability to navigate hilly train in different weathers where other bikes are bound to fail. If you ask someone what does a dirt bike is to them, you will get different answers from each person. For someone, it is the dirt flying around when they speed off, for another one, it is roaring sound that gives them the feel. If you are new to this experience than these interesting dirt bike facts are going to make you feel right at home.

Dirt bikes are designed for agility, maneuverability, and lightweight. Due to this, the dirt bikes have an engine size below 500cc. There are some dirt bikes with 50cc engines, and even they perform well.

Many people use dirt bike in races, so to remain fast they are made lightweight. Compared to their size, the dirt bikes are not that heavy and to achieve this feat, many manufacturers leave unnecessary parts out, and they use aluminum, plastic, and even carbon fiber.

Dirt Bikes like KTM 125 weighs around 195 lbs without Fuel, and this is one of the factors that gives the rider the ability to perform maneuvers smoothly.

It’s obvious that someone doesn’t organize a race if the bikes are slow. But the interesting fact is how fast these dirt bikes are. Even 50cc dirt bikes designed for kids can touch 40 mph.

Some of the fastest dirt bikes are 450 4-stroke and 250 2-stroke motocross. They are capable of going for 0 to 60 miles per hour in just 5 seconds.

4. Dirt Bikes Are Not Road Legal

You may have heard it many times that “bike x is best off-road dirt bike”, notice the word “off-road” is used in the above statement that is because the dirt bikes are not legally allowed to be used on the roads.

5. Dirt Bikes Can Be Used On Highways

You must be thinking that I just said that the dirt bikes aren’t allowed to be used on roads legally and now I am claiming the exact opposite. Well, both statements though contrary, are accurate. To make a dirt bike street legal, you have to modify your bike and get the permit.

The process of legalizing the dirt bike for the road is not simple and requires numerous modifications like adding headlights, tail light, turn signals, rearview mirror, horn, kickstand, speedometer, wheels, and if you are in California, then the exhaust has to meet the standards too. This whole process will make your bike heavier. After that, you have to apply for approval. If you are willing to alter your dirt bike this much only, then you should do it.

If you see a dirt bike for the first time, you will notice that it is taller than other bikes. This is done to achieve a large amount of suspension travel. Most dirt bikes have 12-13 inches front and rear suspension to make for a smoother ride, and this absorbs the shock from landing making it less strainful for both the rider and the bike.

7. Dirt Bikes Are Easy To Maintain

If you want to maintain your bike yourself, then you have a piece of good news on that front. The design of the dirt bikes makes them easier to manage for anyone. Yes, you will need some special tools to repair them, but these tools are readily available, and you can watch several tutorials on YouTube on fixing any type of problem you might face in the future. If you are unsure about your skills, then you can hire a professional to fix the issue.

8. You Have A Lot Of Choices When It Comes To The Dirt Bike Manufacturers

There are various dirt bike manufactures in the market, but the Japanese brands like Honda, Yamaha, Kawasaki, and Suzuki stands out. They have gained a massive chunk of market share, and their constant presence is a testament to their build quality. If you are looking for an electric dirt bike than Austrian manufacturer KTM is a big player, and you will notice many riders using their bikes.

9. Dirt Biking Movies Are A Lot Of Fun To Watch

Their unique qualities and maneuverability entice the audience so it should not come as a surprise that they have made their way into Hollywood.

You might notice many scenes with an actor riding a dirt bike making his escape from a crowded street or performing some crazy stunts. If you are looking for a good dirt bike movie, then I would recommend Fox Racing’s Terrafirma and Dust to Glory.

2-stroke dirt bikes: When it comes to power to weight ratio, they are the at the top of the line. They are also cheaper compared to a 4-stroke dirt bike, and they also weigh 10-20% less. But the main issue with them is their high emissions, and because of that reason, they failed to meet the Euro 4 emission requirements, which led to many of the manufacturers abandoning their production.

But the Austrian company KTM has given them a new life their fuel injection system has allowed the 2-stroke dirt bikes to meet the Euro 4 and 5 standards. This technology has made the revival of 2-stroke engine bikes possible, and you can expect to see more of them in the future.

4-stroke dirt bikes: They have lower emission rates, but that comes at the cost of the weight and power. Not only that but they also cost more than a 2-stroke dirt bike. They have many moving parts which makes them much harder to maintain.

All the manufacturers offer a 4-stroke variant, and due to the 2-stroke engine’s emission rate, they have become more common and are a better option for a beginner.

Electric dirt bikes:  They are not as common as 2-stroke and 4-stroke dirt bikes, but they are gaining market share quickly, and with most of the auto industry moving towards electric vehicles we are going to see more of them. Many manufacturers are offering 50cc electric bikes with 2 hours of battery life, which is a good option for kids. Some top riders use them in competitions too.

The electric engine doesn’t need maintenance, and fewer moving parts make them very simple to maintain. I would recommend any beginner to start with the electric dirt bike.

11. There Are Lots Of Things You Can Do With A Dirt Bike

You can do more than just ride fast with a dirt bike. There are numerous activities you can do when you own a dirt bike, ranging from enduro competition, trail riding, motocross racing, fun riding, and many more.

12. Dirt Bikes their Origin To Britain

Before these Japanese manufacturers took over the industry, the British BSA was the most common dirt bike in the United States. The dirt biking originated in the UK, and motocross is believed to be evolved from 1909’s Auto Cycle quarterly trial.

13. Dirt Bikes Are Built For Playing In The Dirt

This is a pretty obvious one. As you can guess by the name these bikes perform best in the dirt. Unlike regular bikes, their design enables them to function well in uneven terrain without taking any damage. You won’t need a well-built road to ride them.

You may have already known some of these dirt bike facts stated above, and some of them might be new for you. Let us know about your thoughts on these facts in the comments section below and if you know any dirt bike facts that you would like to share with us let us know and we will include them in our list.

If you loved these facts than you would also love these dirt bike movies.

DirtBikeHeaven.com participates in the Amazon Services LLC Associates, an affiliate advertising program designed to provide a means for sites to earn advertising fees by advertising and linking to Amazon.com. When you buy a product referred by us, we earn a small commission, this doesn’t affect the cost of the product.

This website uses cookies to improve your experience while you navigate through the website. Out of these cookies, the cookies that are categorized as necessary are stored on your browser as they are essential for the working of basic functionalities of the website. We also use third-party cookies that help us analyze and understand how you use this website. These cookies will be stored in your browser only with your consent. You also have the option to opt-out of these cookies. But opting out of some of these cookies may have an effect on your browsing experience.
Necessary Always Enabled
Necessary cookies are absolutely essential for the website to function properly. This category only includes cookies that ensures basic functionalities and security features of the website. These cookies do not store any personal information.
Non-necessary
Any cookies that may not be particularly necessary for the website to function and is used specifically to collect user personal data via analytics, ads, other embedded contents are termed as non-necessary cookies. It is mandatory to procure user consent prior to running these cookies on your website.
SAVE & ACCEPT